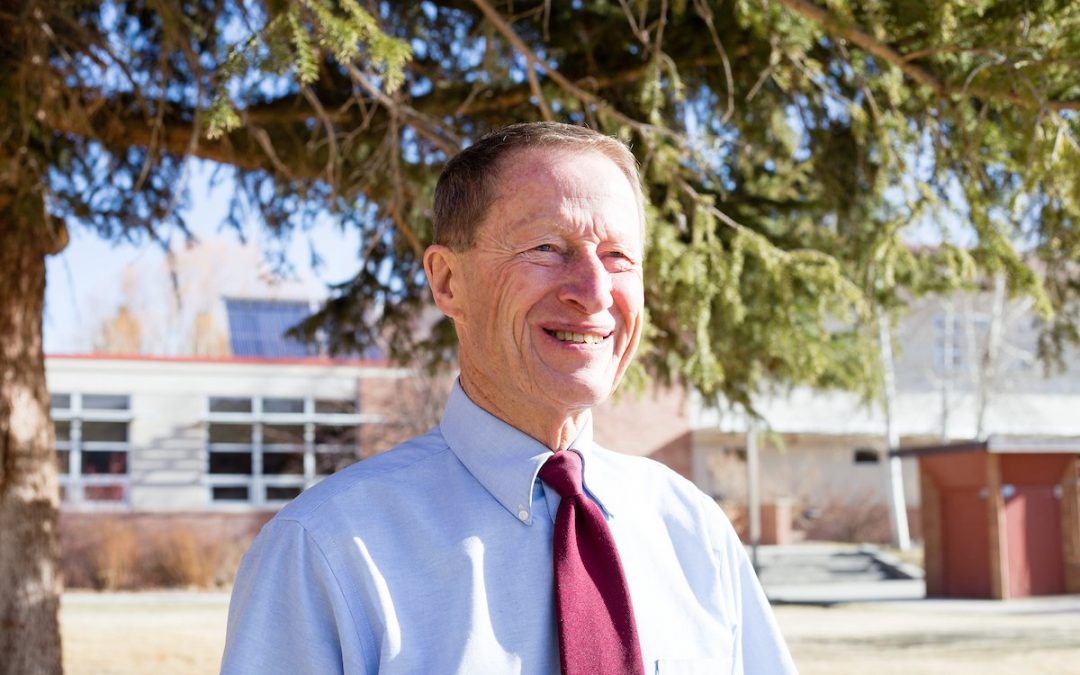 Duane Vandenbusche, Ed.d., currently the host of our weekly webinar series covering multiple topics on the history of the Gunnison family was recently named the Offiial Colorado State Historian. The press release from History Colorado is below.

DENVER, Colo. (July 8, 2020) — A legendary educator, coach, and Colorado outdoorsman is making his next historic ascent. Dr. Duane Vandenbusche, Ed.D., professor of history at Western Colorado University in Gunnison, begins his one-year term as the official Colorado State Historian on Colorado Day, Saturday, August 1. The author of 11 books and the longest serving active professor at any public higher education institution in the state, Vandenbusche assumes the mantle from noted historian and author Dr. William Wei.

Vandenbusche is the first State Historian based outside the Front Range in the 96-year history of the position. The council rotates its leadership position every year on Colorado’s birthday. Each transition helps to create better representation and reach for the state, to amplify different perspectives, and to reinforce the collective foundation of history and storytelling. In keeping with the influential, forward-leaning practices of History Colorado, which is home to the nation’s largest state historical fund for preservation and operates ten museums and historic sites statewide, the council embraces a collaborative and inclusive approach to leadership. Fellow council members are Nicki Gonzales, Tom Noel, Jared Orsi, and William Wei.

An encyclopedic polymath who has taught the state’s history for nearly 60 years, Vandenbusche concentrates his expertise on western Colorado. His textbook, A Land Alone: Colorado’s Western Slope, has been the volume of record on its topic since its first edition in 1981. History Colorado will share Colorado 101, ten entertaining podcasts spanning his knowledge of state history, throughout the coming year. Subjects include the Black Canyon of the Gunnison, great surveys of the American West, mining, narrow gauge railroads, ranching, skiing, Spain in Colorado, water, the Western Slope, and women in Colorado history.

Dr. Vandenbusche plans to provide entertainment as well as insight during his term. In celebration of his appointment, Coloradans can enjoy several songs performed by Vandenbusche in Colorado’s great outdoors beginning August 1 at h-co.org/coloradoday. Lectures in at least four different regions of Colorado are also forthcoming, along with new writing for The Colorado Magazine that is provided to members of History Colorado and other inquiring minds.

“What an honor it is to be Colorado’s State Historian. I look forward to representing the people and different regions of the state, especially the sometimes neglected Western Slope,” said Duane Vandenbusche. “Colorado is a diverse state and I hope to emphasize that diversity during my tenure. It is important to me to show where Colorado has been, where it is now, and where it appears to be heading.“

“To have Dr. Vandenbusche serve as the State Historian is a tremendous asset for the people of Colorado,” said Jason Hanson, History Colorado’s Chief Creative Officer and Director of Interpretation and Research, who facilitates the State Historian’s Council. “Few can match the depth of experience and knowledge he brings to Colorado’s history, or his exemplary record across six decades as an ambassador throughout our state for the value of history.”

Dr. Wei hands the baton to Vandenbusche after an influential year. An expert on the history of Colorado’s immigrant communities and their lasting contributions to the state, Wei’s knowledge was a constant companion to current events in the news. He lent insights about Denver’s first race riot and its problematic commemoration to 9News and Colorado Matters, offered details about Benjamin F. Stapleton’s involvement with the Ku Klux Klan to CNN, discussed the 150th anniversary of the transcontinental railroad with Colorado Edition, and addressed racism against Asians during the COVID-19 pandemic with Colorado Public Radio, among several other items featuring his input. Profiles of Dr. Wei are available from the Colorado Sun and the Denver Post.

About Duane Vandenbusche
Born in Michigan in 1937 and raised on an Upper Peninsula dairy farm with no indoor plumbing, Dr. Vandenbusche came to Colorado in 1962 to accept a position on the faculty at Western Colorado University that he has held ever since. He coached track & field and cross country for 37 years at Western from 1971 to 2007, and established the women’s programs there following the passage of Title IX in 1972. His teams won 12 national cross country championships—eight for men and four for women—and produced four Olympic runners despite being a small Division II program. He is a seven-time NCAA National Coach of the Year. Vandenbusche is a survivor of stage-three lymphoma diagnosed at the age of 78. Dr. Vandenbusche’s “Tales of the Gunnison Country” are staples of Crested Butte and Gunnison radio stations. His life and work is profiled in the independent documentary Breaking the Mold – Human Inspirations available from RMPBS and breakingthemold.tv.

About the State Historian’s Council
Founded on August 1, 2018, History Colorado’s State Historian’s Council reaches across the state to aid in interpretation of the history of Colorado and the West, providing opportunities to expand the understanding of the historical perspectives, cultures, and places of Colorado. The Council is entering an important year. It will partner with a commission to rename Denver landmarks and public spaces formed by Mayor Hancock in the wake of protests led by Black Lives Matter, and share informative historical contexts like We Can’t Afford to Fail This Time, a new essay by council member Nicki Gonzales widely shared by Colorado Public Radio.

About History Colorado
History Colorado’s eight museums around the state are now reopening to visitors. Inclusive, values-driven, and intentional, History Colorado has responded to the COVID-19 pandemic with an agile reorganization. Its blitz has created new educational channels for adults and youth (including at-home summer-camp kits now available), full-length episodes of its podcasts, a series of Archaeology & Preservation webinars, a major volunteer project, a weekly digest with over 28,000 subscribers, and one of the nation’s most comprehensive collecting initiatives: a partnership with dozens of schools, communities, and more than 40 newsrooms called History in the Making. While working from home, its State Historical Fund staff distributed more than $1 million in grant dollars to community projects across the state this spring. It continues its grant funding on schedule.

History Colorado’s outlets are publishing Black voices and confronting entrenched racism in historic preservation. It has employed artists of color to create new works that will be added to Colorado’s collection, and opens Women Behaving Badly by Black artist Adri Norris on July 23. Within the last year History Colorado has added curators of Latino Heritage and LGBTQ+ History to its staff, and added a full-time position to its Museum of Memory team, which works proactively to incorporate underserved communities and voices into its contemporary collecting initiative and other efforts.

History Colorado’s mission is to create a better future for Colorado by inspiring wonder in our past. We serve as the state’s memory, preserving and sharing the places, stories, and material culture of Colorado through educational programs, historic preservation grants, collecting, outreach to Colorado communities, the History Colorado Center and Stephen H. Hart Research Center in Denver, and nine other museums and historic attractions statewide. History Colorado is one of only six Smithsonian Affiliates in Colorado. Visit HistoryColorado.org, or call 303-HISTORY, for more information.